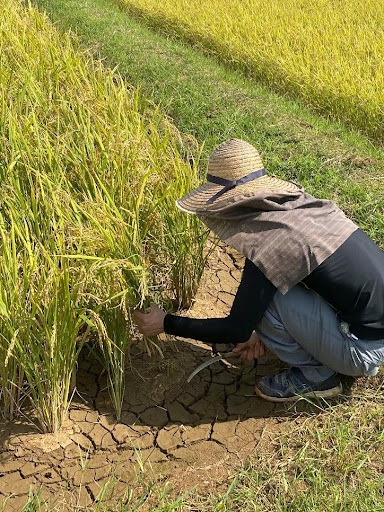 Hello! I’m Anna from Texas, and I live on Goto Island. There are a lot of rice paddies on Goto Island, but before coming to Japan, I had never seen a rice paddy before. Therefore, I did not know almost anything about rice. What about you? What do you know about rice? What does it look like? How is it harvested?

I think we all know that rice is a very important food in Japan. ‘Rice’ in Japanese is ご飯 (gohan). ご飯 (gohan) is also the name for  ‘meal’. 朝ご飯'(asa-gohan) is ‘morning meal’ or breakfast. 昼ご飯 (hiru-gohan) is lunch. 晩ご飯(ban-gohan) is dinner. ‘Rice’ and ‘meal’ are the same word in Japanese because rice is eaten at every meal! That’s right, a lot of Japanese people (my students included) eat rice during all three meals- breakfast, lunch, and dinner. That surprised me! In America, I ate rice maybe twice a week. Rice is a staple food  of the Japanese diet and so they put a lot of effort into growing it.

I did not know ANYTHING about rice before I came to Goto. Literally. This is really embarrassing, but I actually thought that rice grew under the ground- like a potato! (ha!) It wasn’t until I came to Japan that I realized that rice looks like this:

Above is a picture of rice that is almost ready for harvest. The green sprouts have grown up to be over two feet tall, and the white rice, now encased in a golden-brown shell, has grown up and now hangs slightly down like a flower from the weight.

Rice is planted in April or May and  harvested in September or October. Farmers here have been using the same rice paddy land to grow rice for over five generations.

The  picture on the left is a closer look at one rice paddy. As you can tell, when you harvest in Goto, there is no water under the rice plants. The rice grows just above two feet tall. One rice paddy is pretty big.  The picture on the right shows a large field full of different rice paddies. Each one is a little different in color. There is a stream down the middle used to drain the water used to grow rice. I think this scene is really beautiful.

Someone has to harvest all of this rice! There are two ways to harvest rice, by machine and by hand. The farmers in Goto that work in these fields are getting older and older.  Few young people want to be rice farmers, fortunately machines make the work a lot easier. With a cutting and separating machine, you can finish harvesting one rice paddy in less than 30 minutes.

While it’s easier to use a machine, I wanted to try my hand at the more traditional art: Harvesting by Hand! Yamashita-san is a fifth generation farmer who invited me to learn about harvesting rice by hand. His knowledge is really impressive! He taught me about the process.

Step 1 Cut: Use a sickle to cut the rice in one smooth motion.

Step 2 Tie: Tie the bunches of rice together very tightly.

Step 4 Separate: Take the rice grains off the rice stalk

Steps 1 and 2 took two hours. My body was sore the next day. You need to be in good shape to be a rice farmer! We were all very proud of our hard work, but we only finished about 1/20th of the rice paddy. After cutting and tying, we did Step 3: hang the rice upside-down outside. Yamashita-san told us that traditionally the rice is hung for 2-3 weeks after harvesting. Modern harvesting with machines skips this step.

I learned that by hanging the rice upside-down, the nutrients in the stalk make their way down into the white rice grains. Yamashita-san emphasized that this process makes the rice healthier and more delicious.

Harvesting the rice by hand took a lot of time and left calluses on my hands. When I asked Yamashita-san why he doesn’t use machinery, he said that his goal is to make the most healthy and delicious rice that he can make. He strongly believes that harvesting by hand is the way to do that. Although it takes 60 times longer, that extra time he spends in the rice paddies gives off his love to the rice, and that makes the rice the most delicious. That hard work is worth it if his family can become healthier and happier. If his family eats rice three times a day, as many Japanese families do, then just think about all the love they are eating!

This experience has given me a greater appreciation for rice. I have been eating so much more rice in Japan that I was starting to get tired of it. But this experience has renewed my appreciation for rice, understanding all of the time that goes into making some of the rice by hand. Now, I go out of my way to buy rice grown and hand-harvested on Goto, even if it’s two or three times the price. It’s definitely worth it.