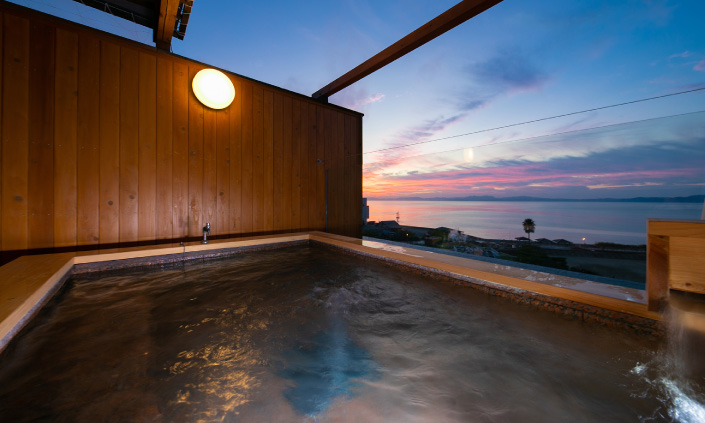 With average daily temperatures ranging from 7-11°C (45-52°F) the winters in Nagasaki can be a little chilly. What better way to combat the cold than to take part in one of Japan’s oldest traditions of onsen? You might be thinking, “What exactly are onsen?” Onsen are naturally occurring hot spring baths in Japan. However, not all hot bodies of water were created equally.

An onsen is legally considered legitimate if it meets two qualifications standardized by the Japanese government. First, it must be at least 25°C. Second, it must contain any of 19 common minerals that are found in Japanese waters. These include, but are not limited to, calcium, iron, magnesium, and sulfur. The minerals and chemical makeup of the water are believed to provide health benefits and promote life longevity. Whether this is true or not doesn’t lessen how good it feels to soak in a hot bath on a cold winter evening.

Onsen are deeply rooted in Japanese culture. The Nihon Shoki (The Chronicles of Japan), an ancient text of classical Japanese history written in 720, contains evidence of onsen. Dogo Onsen in Ehime prefecture, Shirahama Onsen in Wakayama prefecture, and Arima Onsen in Hyogo prefecture were all referenced in this text and still exist to this day. While the tradition of onsen is over a millennium old, the practice is still as popular as ever in the present day.

While bathing naked together can be considered strange in many western cultures, in Japan it’s perfectly normal. Hadaka no tsukiai or “naked relationship or naked friendship” is the Japanese concept of spending time together naked. In no other place is this more apparent than in an onsen. You may see businessmen relaxing after a hard day’s work, a group of athletes after an intense match, or a bunch of ojiisan come to rest their weary bodies. Regardless of status, rank or age,, everybody is equal once in an onsen. When everybody is naked, everything is laid bare.

No other place in Nagasaki is more synonymous with onsen than the Shimabara hanto (peninsula). The volcanos that heat the water for many onsen scattered around the hanto are well known in Nagasaki, making it a popular destination during the winter months. Now that you know a little about onsen, I’m sure you would like to try them out yourself. I’ve visited many onsen in the area and these are some of my personal recommendations.

Located near the historic ruins of Harajo Castle, Harajo Onsen Masago is the most popular onsen in Minamishimabara. Their sodium bicarbonate baths are said to treat muscle and joint pain, poor circulation, and promotes smooth skin. The temperature of the water is also milder compared to the hotter water of other places in the Shimabara peninsula. Enjoy the panoramic view of Fugendake to the Ariake sea while you soak in warm bliss. This onsen is deeper in the countryside, so it’s rarely crowded. I am not sure if tattoos are allowed, but I have never had problems while bathing. I have never shown my tattoos when entering or buying tickets.

Probably the chicest and most contemporary onsen in the Shimabara hanto, Hotel Nampuro hosts an impressive variety of options when it comes to experiencing onsen. With baths that range from open-air single-person tubs to prone hot tub baths to microfoam baths, there are plenty of options for you to choose from. If you want refreshments while you soak, they offer drinks free of charge to keep you hydrated or caffeinated. Ever wanted to play some board games or watch your favorite variety show? You can do both! There’s a TV in the indoor communal bath and games like Othello are readily available when taking a break from the hot water in the outdoor area. The open-air area also has a gorgeous view of the Ariake sea. On a clear day, you may even be able to see Kumamoto. The water quality is a mix of magnesium and sodium bicarbonate that is said to relieve any tension held in your body. Tattoos are not allowed, but if you have small tattoos, you can probably cover them and be fine.

Kojigoku Onsen is a small onsen nestled in the mountains of Unzen. It’s just a 5-minute drive away from the main town or about 20 minutes on foot. The octagon domes that sit on each side of the building separate the men’s and women’s baths. What this old-fashioned onsen lacks in bath variation it makes up for in the quality of water. The hydrogen sulfide water is pumped up directly from beneath the onsen. It’s milky white in appearance and is said to enhance skin beauty and is effective in treating certain skin problems like eczema and rashes. While relaxing in one of the two baths in each room, you can admire the high ceiling that makes the room seemingly bigger than it actually is. You’ll definitely leave this place feeling more refreshed than ever before. Tattoos are allowed.

Admission: 460 yen for adults and 230 yen for children

Obama is a town known for having plenty of onsen, but Tsutaya Ryokan is regarded as having one of the more premium private onsen in the area. The communal bath is fairly unassuming, offering a sauna, sleeping bath, and open-air bath. For the price, it’s not worth it, but what this hotel specializes in is the exquisite private onsen on the top floors. There are 5 private open- air baths available and are highly recommended during sunset. Obama sunsets are simply stunning, but viewing one from the luxury of your own rooftop onsen is an experience everyone should have at least once during their time in Japan. Call ahead to ensure you can snag yourself a private bath. It is a little more expensive for a private bath, but worth it for the view or if you want some privacy. Tattoos are not allowed, but in private baths it’s ok. The quality of the water is sodium chloride (aka salt) and it’s scorching hot at 105 C, the hottest in Japan.