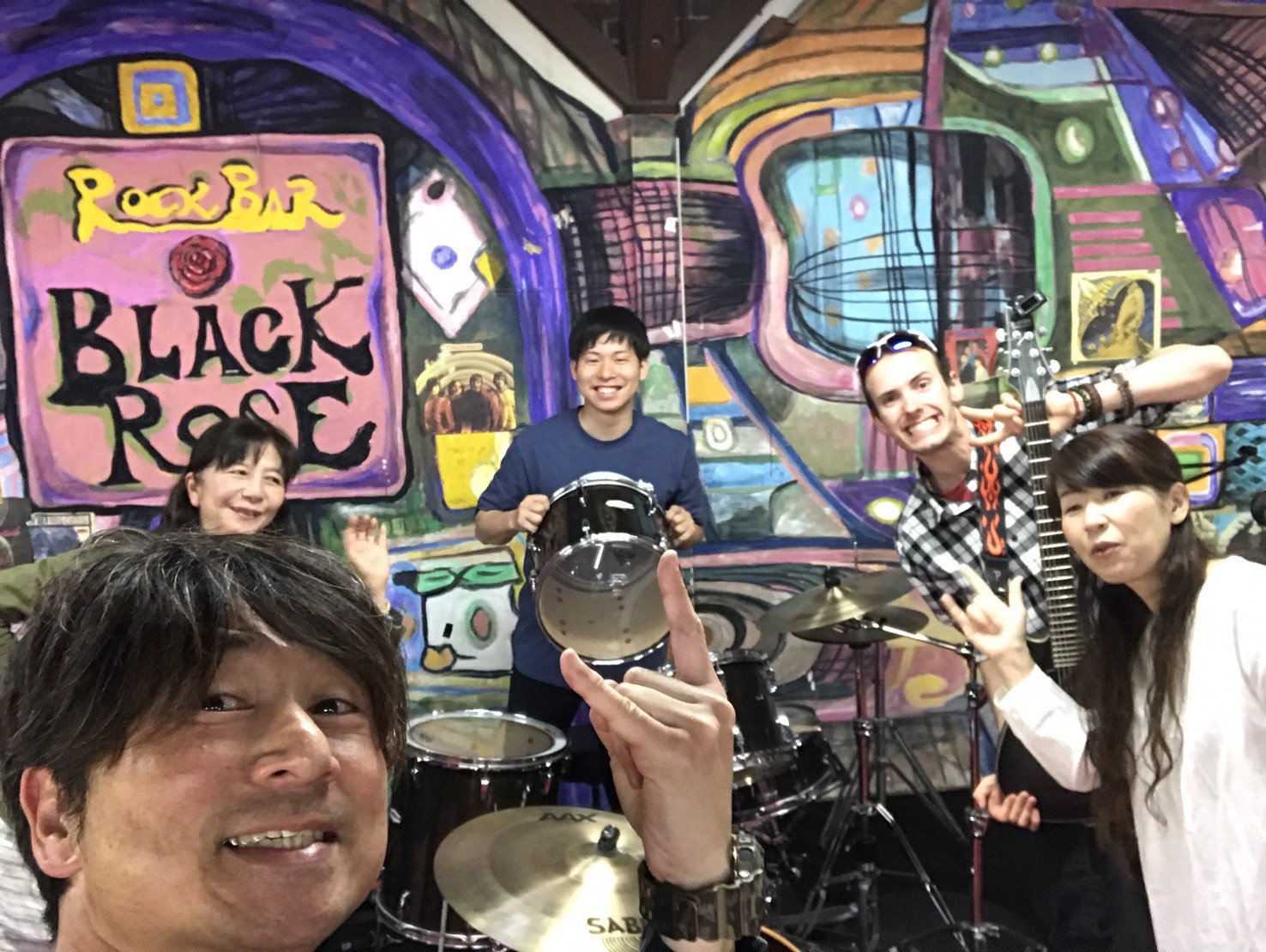 Playing music on stage in front of an audience is one of the greatest feelings in the world. So when the opportunity to join a band with other local Japanese teachers came around, you better believe I took it. My name is Brandon Danford, I am a 5th year ALT (Assistant Language Teacher) in Hirado on the JET Program and I love playing the guitar. In July 2017, I was invited to join a local rock cover band called LIVE MOON CHILD. I was contacted by the bass player before coming to Japan about joining. Rather conveniently, my predecessor also served as a guitar player in the band. Once I heard about this opportunity, I packed my guitar with me and started practicing with the band soon after arriving in Hirado.

LIVE MOON CHILD (also known as LMC) was formed by teachers at Ikitsuki Elementary School and, despite a few lineup changes, has continued for almost 10 years. The band’s name was created by the founding vocalist and the bassist, coming from  Ikitsukikko (生月っ子), meaning Ikitsuki Child. The kanji used to make up 生月 are 生きる, meaning “to live,” and 月, meaning “moon.” However, the vocalist suggested that “live” should be read as LIVE (ライブ) instead, and from there LIVE MOON CHILD was formed. Originally formed as a one-off teacher band for the 2012 school graduation, the band continued to practice together and play songs that overall had positive messages behind them; songs primarily aimed for children. The band at the time played songs from artists like Tancobuchin (たんこぶちん) and Mao Abe.  As time went on, the events that LMC  would play went beyond just school events, and with that the repertoire changed as well; moving past songs geared towards children and moving in a direction to play music that everyone of all ages can enjoy.

Nowadays, LMC and I also play a variety of Japanese pop-rock songs ranging from Showa era classics like “Gakuen Tengoku” (学園天国) by Finger 5 to more modern rock songs from bands like KANA BOON. Recently, we’ve been taking Showa era songs and putting it together with a classic rock song, using the lyrics of the Showa song while incorporating parts of the classic rock song. This trend started when we covered a hybrid song like this from one of our senpai Nagasaki City bands (the guitarist of which is one of LMC’s founding members). They took the Showa classic “Amagi goe” (天城越え) by Sayuri Ishikawa and the classic rock song “Burn” by the British rock legends Deep Purple. LMC not only plays this song, but we have also created our own hybrid song, taking “Ihoujin” (異邦人) by Saki Kubota and fusing it with “The Final Countdown” by Europe.

Playing in a Japanese band as a foreigner can be a bit intimidating, especially given potential language barriers. But if you can work past intimidation and work towards communication, then you will certainly be able to make music! In the four years I have been in LMC, I have had the opportunity to play shows in Hirado, Sasebo, and as far as Isahaya. One of my favorite memories is playing at the Yui no Hama Marine Park in Isahaya in 2019 for a summer music event. Playing a roughly 40 minute set filled with Japanese pop-rock songs right by the beach left a lasting impression on me.

Every musician loves their fans,  and having Japanese patrons of Shimamura Music near Sasebo Station recognize me as ‘LMC guitarist-san’ was a wonderful encounter.Other local bands in the Sasebo area are also very inviting, generous, and eager to communicate. I am fortunate to be a part of the band scene in Sasebo.

LIVE MOON CHILD  primarily plays in events in Hirado and the Sasebo area, but given the coronavirus pandemic, we have not had the opportunity to play live in almost a year. Practices have also been scarce at times. However, we are most definitely eager to get back out on stage and play. If you are interested in seeing us play, we would love to see you come out and show your support!