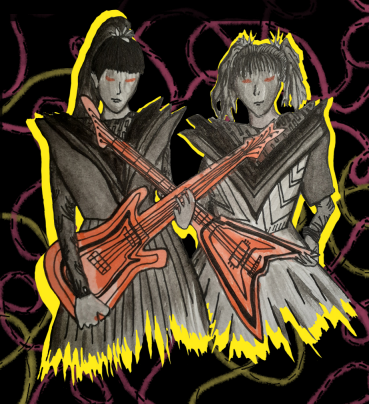 Japan has produced no shortage of talented and globally influential female musicians, from pop icon Utada Hikaru to beloved composer and rock star Yoko Kanno. But there is one musical genre in particular where women have been carving out a place for themselves front and center lately, and that genre is heavy metal.

Over the past 15 or so years, the number of Japanese all-female metal bands has grown exponentially in what is being called the “girl metal band boom.” This has given rise to some of Japan’s best bands, many of which have reached international acclaim, including Aldious, Lovebites, and one of the most well-known and loved heavy metal bands in the world today: Babymetal.

Babymetal first took the stage in 2010, quickly grabbing global attention with their idol-meets-metal performances. They are credited with establishing kawaii metal, a relatively new subgenre built on the foundation of the girl metal band boom. Predominantly female-led, kawaii metal bands mix idol aesthetics and pop melodies with the rich compositions and distorted sounds of metal music.

But Japan’s rich history of women in heavy metal goes back to the 1980s when the genre was still relatively new and just starting to garner a following in Japan. One of the best acts at the time was solo artist Mari Hamada, often referred to by fans as the Queen of Heavy Metal. This was also around the time that Naon no Yaon, a music festival exclusively featuring all-female bands from various rock, metal, and alternative music subgenres, was established. The festival was founded by the band Show-Ya in 1987 and is still ongoing as one of the few successful all-female rock festivals today.

Naon no Yaon was held as a live-stream in the spring of 2021 and featured a stellar lineup of artists considered to be part of the girl metal band boom, including power metal powerhouses Mary’s Blood and Nemophila. This movement shows no signs of slowing down, and if the past decade and a half are any indication, the future of heavy metal across Japan and the world is bright in the hands of these talented women.