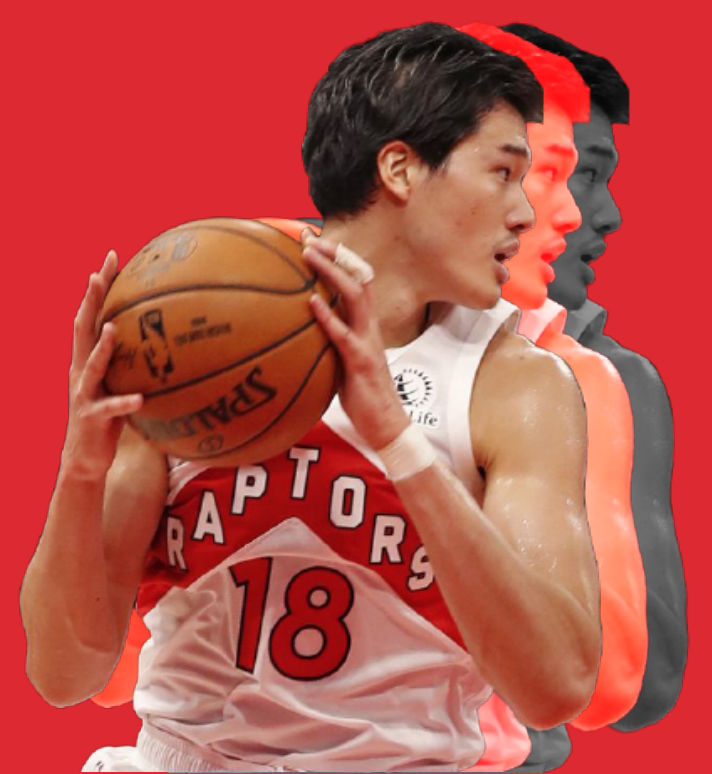 From the moment he became a Raptor, it was clear that Yuta Watanabe was making a unique connection between his homeland, Japan, and his new home, Toronto.

Hailing from Kagawa Prefecture, Watanabe started his NBA career in 2018 on a two-way contract with the Memphis Grizzlies and their G-league affiliate, the Memphis Hustle. Two years later in December 2020, he joined the Raptors on similar terms. It was a historic moment, marking the first time that a Japanese player would be signed to the NBA’s only Canadian team.

Watanabe was an instant fit for the Raptors’ perseverance-centric team culture with his high energy and determination. It’s an attitude he cultivated from a young age under the mentorship of Shikama-sensei, his high school basketball coach at Jinsei Gakuen. The 26-year-old quickly made a role for himself as the Raptors’ go-to guy whenever they needed a spark on either end of the court, and this hustle has been rewarded with his first standard NBA contract, signed with Toronto in April 2021.

Raptors head coach Nick Nurse spoke highly of the upgrade, saying, “He deserved it, he earned it,” and that it was reflective of the work Watanabe had put in for the team. It has also firmly cemented the connection between Canadian and Japanese basketball. In a conversation with Nurse about Watanabe’s new contract, Takeshi Shibata of Nippon Bunka Publishing said that this signing has made Toronto “forever linked to Japanese basketball society.”

But Watanabe’s link with Canadian basketball began much earlier, during his college days playing for the George Washington Colonials. There, he worked closely with coach Maurice Joseph, a Montreal native who had a successful college career at both Michigan State and Vermont and comes from a well-known Canadian basketball family. Under Joseph’s guidance, Watanabe had an incredible four-year run with the Colonials, leading them to their first ever National Invitational Tournament win in his sophomore year and becoming their top scorer as a senior.

Joseph congratulated Watanabe on Twitter when the latter inked his new deal, remarking that it was great to see Watanabe succeeding in Canada. That’s the thing about playing in the NBA for the Raptors – you have a whole country at your back. And as one of the only two active Japanese-born NBA players — along with the Washington Wizards’ Rui Hachimura — Watanabe now has two nations rooting for him.

Although it has been hard for Raptors fans to show their love in-person, as the COVID-19 pandemic forced the team to temporarily relocate to Tampa Bay, they have embraced Watanabe with open arms. From Tweets about his on-court performance, YouTube videos discussing his potential with the team, and podcasts naming him the most handsome power forward in the league, the amount of online content from the Raptors’ fan-base praising Watanabe has been endless. Without a doubt, his welcome at Scotiabank Arena, the team’s home court in Toronto, will be spectacular.

This love is matched only in Japan, where Watanabe is a clear favorite among basketball fans. His is the top-selling jersey in the country, and while the Raptors saw increased popularity in Japan around their 2019 pre-season games against the Houston Rockets in Tokyo, it’s nothing compared to what they are experiencing now. Thanks to Watanabe, for the first time in Raptors history, they are the most popular NBA team in Japan.

Speaking about what he thinks his success means in Japan, Watanabe has said, “I hope a lot of kids watch us play in the NBA and then their dream becomes [joining] the NBA, just like me and Rui.”

While basketball does not have as large of a Japanese following as baseball or soccer, Watanabe and Hachimura’s achievements have indeed fostered enthusiasm for the sport in a trajectory reminiscent to that of Canada’s. Before the early 2000s, basketball was largely overshadowed in Canada by sports like hockey, and Canadian NBA players were few and far between. It wasn’t until the success of the Raptors’ Vince Carter and Canadian all-star Steve Nash that the sport gained real traction and more Canadians started playing in the league. It has since grown tremendously in popularity, and Canada is now the largest contributor of international NBA players, including Watanabe’s fellow Raptors, Chris Boucher and Khem Birch.

Undoubtedly, Watanabe will continue to have an impact on basketball — in Japan and Canada — as his development in Toronto proceeds. This season has come to an end for the Raptors, but as the team looks to their future, it is clear that they intend to give Watanabe plenty of opportunities to shine on the court. And with his unique ties to both Canadian and Japanese basketball, he will be doing it with support that goes quite literally across the whole world.