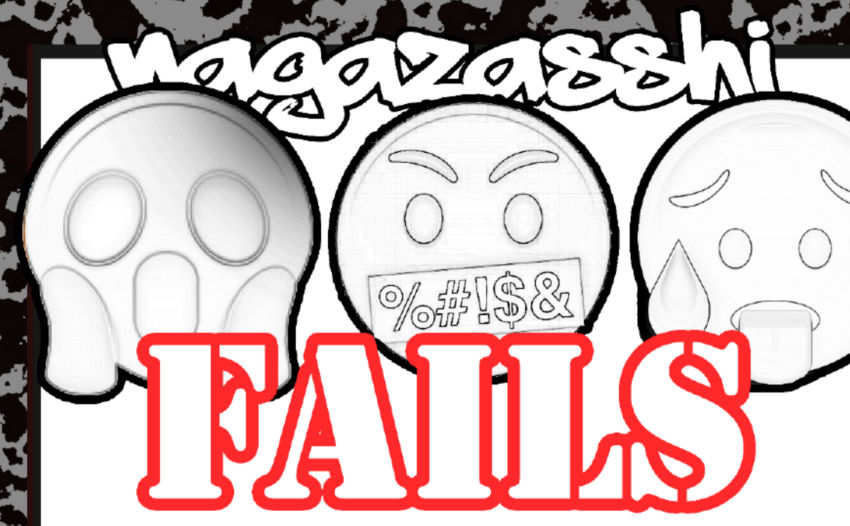 This edition marks a final issue for some of our senior writers and a new beginning for the Nagazasshi. To honor that and reflect on their experiences up ‘till now, some of our staff have written about their own personal failures — whether it was culture differences, not understanding the language, or just a huge mistake on our part, we’re happy to share and laugh at our own mistakes!

After all, failure is necessary for us to grow and learn.

Dave: I once told a Japanese friend about my dream. It turned out that I was talking about a mouse. I was supposed to use nozomi 望み (wish or hope), but I ended up using the word nezumi  鼠 (mouse) instead.

J.S.: If you’ve ever received a nengajo (New Year’s postcard), you know it’s covered in bright colors and beautiful calligraphy. Some are printed, others are not.  A couple years ago I received one written by one of my teacher’s children, probably around the age of five. I thought it was so adorable I went right up to my teacher and told him so. His response? “What child? I wrote all my postcards myself.” It was only then that I realized I had made a mistake and effectively told him that his handwriting looks like a toddler’s. I didn’t get another nengajo from him the year after, I probably don’t need to say why.

Abbie: During my second month in Japan, I got my car stuck in a drain on my way to school. I called my supervisor in tears because I was gonna be late and didn’t know what to do. While waiting for my supervisor, teachers at the local preschool saw my plight and informed teachers at my visit school, which was nearby. I ended up with my supervisor, both of my school’s principals, 5 other teachers, 2 nursery school teachers, a neighbor and a local mechanic all witnessing my embarrassing meltdown. Mortifying, but I’m thankful for all of their help, kindness and concern!

Tshego: Getting rid of 1 yen coins can be such a hassle. Especially because they accumulate so quickly! About a year ago, I tried dumping a handful of them in the self service checkout machine at the supermarket- big mistake. The machine literally spewed them all out and started beeping at me. Luckily there were only a few people there to witness my panic, shock and embarrassment. I’m still recovering from this incident.

Ronnie: On senior graduation day last year, an unfortunate tragedy befell one of my co-teachers. Her mother had passed away. To show support, the teachers at my school planned to visit the service together after the ceremony. They had told me we were going to go to a temple, but for some reason, I had misunderstood a temple as a shrine and had assumed we were going to go hiking up there to pray for her mother (I know). After they told me, I went to change out of my suit into sports clothes and went to meet them in the parking lot. When I come out, I’m horrified to realize that the other teachers are still in their blacks suits and realize what a big mistake I have made. Unfortunately, the funeral service was almost two hours away so the teachers couldn’t wait for me so I had to stay at school. I was the only teacher not to go. Now I triple check with my English teacher so that will never happen again.

Charlotte: On my first day (yep…) at the elementary school I work at, the third graders asked me to sit with them for lunch. One kid in particular was very eager to sit next to me. Three hours and 70 new faces later, all I could remember about him was his buzz cut. I went to the class at lunchtime and a buzz cut kid came and brought me to his seat. OK, great, this must be him! Halfway through lunch, though, the homeroom teacher asked me to step outside… and there he was, OG buzz cut kid, crying on the floor and refusing to eat because I had broken my promise! Suffice to say I sat with him as he finally finished his food and played tag after, but boy did it feel bad to make a kid cry on the first day!

Clara: I got distracted while using the school’s laminator and looked away for a few seconds. When I looked back, I couldn’t see anything coming out the other end of the laminator, despite the entering paper continuing to go through. Before the last bit of paper disappeared, I realized I had put the film in the wrong direction, and everything was being burned up by the machine. My teacher, bless her, came immediately when I approached her with my panicked request for help. We couldn’t get anything out of the laminator, or anything else into it. She helped me tell the principal what I had done, and my principal laughed it off and let everyone use her personal laminator for the next year. It still makes me cringe.